The Pioneer Museum committee will strive to become a living memory to those who worked so diligently to develop this area.

Through their work they promote the Fairview region’s heritage by displaying area antiques and artifacts as well as using/demonstrating their use. The museums are open to viewing by the general public and they are a welcome tourism attraction to the region.

The museum site is located north of Fairview on 10 acres of land. Since 1992, committee members and volunteers have been hard at work developing the area into an actual town-site, complete with farm, oilfield, sawmill, demonstration areas and the Lutheran church. Numerous artifacts are currently displayed in several of the restored buildings. With the completion of the Marshall Rolling Exhibit Building, including the workshop space, this will allow the “story” of our pioneers to be told in additional exhibit space and committee and community members will be able to work on antique equipment during the off seasons of the museum in the workshop.  There are various pioneer homes donated by the previous owners (see below). Numerous artifacts are currently being displayed in several of the restored buildings.

The museum is normally open to the public for viewing May through September. Summer staff provide school and group tours, and organize an annual Fun Day in July. This starts with a pancake breakfast, tractor parade, games for the kids, and tea with the Red Hat Ladies. 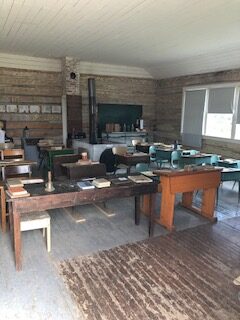 The school was built in 1933 on Keddie land located 2.5 miles north and 11 miles west of Fairview. Mrs. Grace Strickland was the school’s first teacher. The one-room classroom held between 20-32 students from grades 1 through 8. The school closed in 1952 when students began riding the bus to Fairview. The building was then used for United Church services, Christmas parties, socials, and community events.

During the colder months heat was generated by a very large wood burning stove located in the middle of the room. And, it was everyone’s responsibility to bring in wood to feed the large stove to keep the room nice and warm. One of those students was Shirley Pratt, (who later became Mrs. Shmyr) resident of the Harvest Lodge, attended the school from grades 6-8. Shirley spoke of the long 3 mile walk to the school and how she would stop in at a neighbour’s to warm up on those colder, winter days. She also explained how with so many grades in the one large room, older students would help the younger ones with their assignments, which also assisted the teacher.

Shirley reminisced about some of the games the children played outdoors. “Steal the Boot”, which was very similar to tag; “Fox and Geese”, was perfect when there was lots and lots of fresh snow on the ground. Students had to create a very large pie-shaped pattern in the snow and the player chosen to be the “fox” had to tag one of the “geese” running within the pattern to stay away from the one that was it. And, “Anti-I-Over” where the object of the game was to throw a ball over the roof of the school house, yelling “Anti-I-Over!” If the catcher dropped the ball, he had to join the opposing team. The team who captured all of the players won the game!

Soon after Shirley finished school at grade 8, she married John Swicheniuk and became a “domestic engineer”.  They had nine children and today the family has grown substantially with 26 grandchildren, 56 great-grandchildren and 3 great-great grandchildren!

The old school house is one of several buildings on display at the Pioneer Museum, complete with the desks, books, writing instruments, and other school items the children used during this period. The old drinking jug and ladle are also there, as there were no water bottles in the 1930’s and if students were thirsty, they had to take turns drinking from the ladle and water bucket.

Photos align a few of the walls and there is one of Shirley Pratt, lined up with her fellow classmates for their Christmas concert with their Christmas wreaths, in 1945. 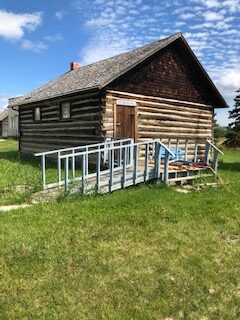 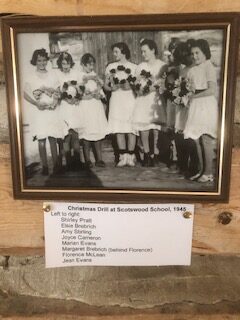 Gordon was the first druggist  in the North Peace. Over the course of his 55 year career, he operated the first drug stores in Peace River, Waterhole and Fairview. The Gordon Hull house, has rare highchairs on display. 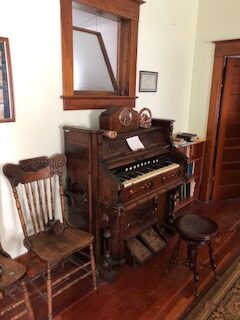 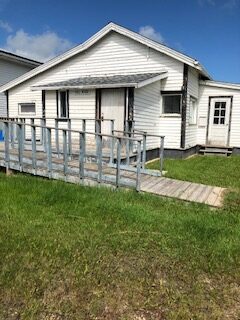 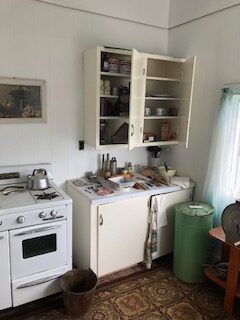 The R.H. Macdonald School (1938) holds many ancient treasures that have been accumulated over the years. From a replica of Mike’s Barber Shop, and Jack McIntosh’s collection of arrowheads, to numerous small animal traps, war memorabilia, native artifacts, and a portable church organ. 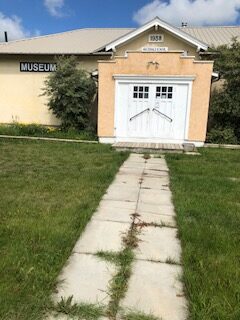 The Trinity Lutheran Church built in 1949 has been donated by the congregation and has been moved to the museum site. Non-denominational services will be provided possibly in 2021. 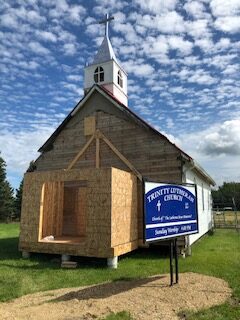 Fred Malkinson arrived in the Peace Country area in August 1925. He was in the banking industry and worked at the Waterhole Union Bank of Canada branch. After this position, Fred farmed, was the stenographer for the Royal Bank of Canada, served time in the army and with his return, became the secretary-treasurer for the Fairview School Division. In 1950, Fred left the school division and partnered with Bob Haining to form Fairview Agencies. With Bob’s passing, Fred changed the business from real estate and insurance to auditing, bookkeeping and income tax preparation. Fred passed away in May 1970. 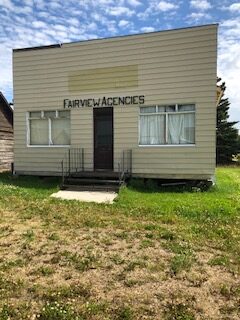 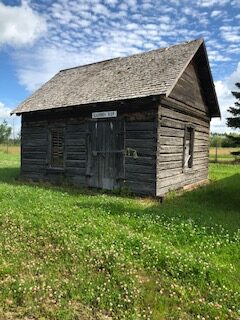 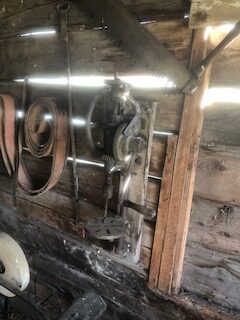 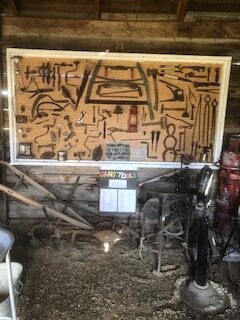 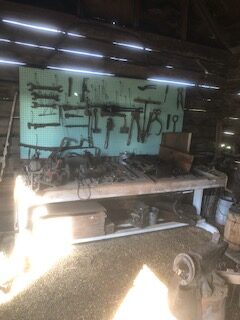 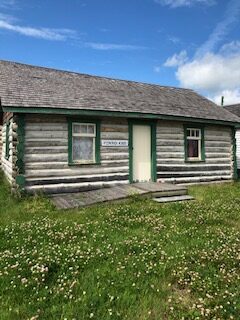 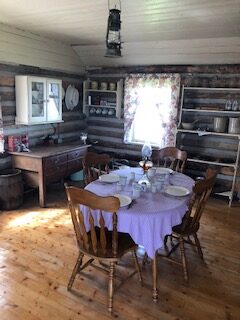 The home belonged to John Sweeney (1864-1949), a poet and trapper. It was originally located on the Sweeney’s homestead in Vanrena. Mr. Sweeney was well known in the area for his poetry. He wrote about local history, creating ballads of events in the Peace Country. Many of these poems centered around the rivalry between Waterhole and his home of Vanrena, a rivalry locals remember as having existed only in Sweeney’s mind. He also wrote about his personal life, including his love of the Fairview area and his strong dislike of farming. 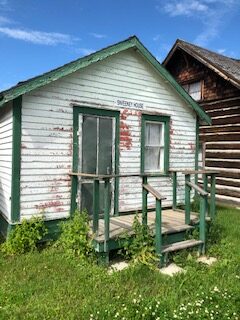 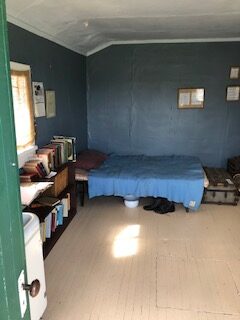 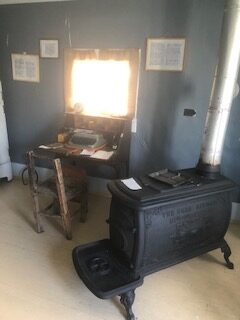 Images from the Morrison House are below. 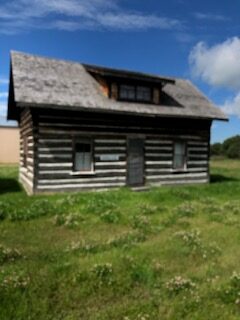 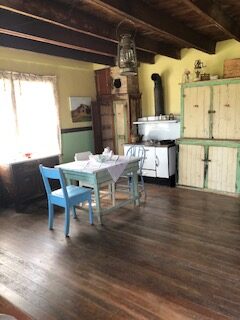 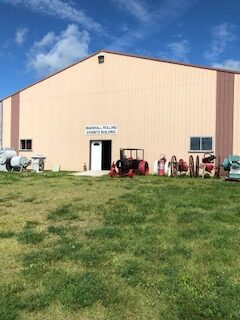 With the completion of the Marshall Rolling Exhibit Building, including the workshop space, this will allow the “story” of our pioneers to be told in additional exhibit space.

Earle Guertin, long-time resident of Fairview and now a resident at the Harvest Lodge spoke fondly of his memories of going to school. He was taught in a country two-room school for grades 1-8, down near Turner Valley. He said he always had good teachers and spoke of several, one being his grade 1 teacher, Miss Burns, whom he liked very much. He explained how during his first year of school Miss Burns got married at Christmas and could not return to teach (women were not allowed to be married and teach, where men could). Miss McGregor was the replacement teacher, whom Earle took an immediate dislike to.

The school was located about 3 ½ miles away, so Earle rode the family horse to school, who as 14 years old. School busses were not available and parents didn’t drive their kids to school, as this was during WWII and gasoline was rationed during this time. Once at school, the horses were kept in a barn until classes were finished.

In high school, Earle had another favourite teacher Mr. McCulla, who taught social studies and biology. Earle spoke very highly of this individual, whom he became friends with and also inspired him to become a teacher! Many years after finishing both high school and university, Earle married his sweetheart Bonnie Madden. He had the chance to introduce Mr. McCulla to his wife at an event. Mr. McCulla described Earle as his “star student” to his wife.

Softball was a popular sport at school, and Earle reminisced about the three Sisters who taught at one of his schools he attended. One of the Sister’s was younger than the other two and enjoyed playing ball as well. She didn’t like to bat, but she loved to be out in the field and used her long skirt to stop the ball if it was a grounder. The boys didn’t like this very much and felt she had an advantage over them. She explained that if they wanted to play ball in her long, heavy skirt, they too could stop the ball the way she did. After that, the boys agreed she could use her methods out in the field!

Turner Valley had the largest oil field in the British Empire during the war and the commodity was much needed for the war effort. Students from grade 8 were being used on the rigs during WWII, which was extremely dangerous. Earle never went to work on the rigs, as his parents felt it was very important to obtain a post-secondary education and not get a job in the oil patch.

So, Earle went on to complete four years of university as a history major and became a teacher. He first taught at Whitelaw School for one year, which was a three-room school for grades 6-9. During his 36 year career, he taught several subjects, including social studies and English, and at several schools including St. Joseph, St. Thomas More and the Fairview High School.

When visiting the museum, make sure to see the old baseball uniforms and baseball on display in the McDonald School. 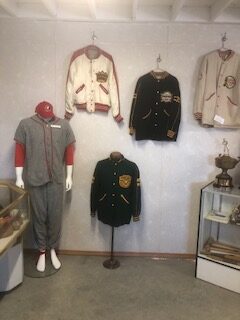